PPE-clad police in Shanghai this week cornered and arrested residents who objected to their homes being turned into Covid quarantine centres.

The Chinese city of 26 million has now spent more than three weeks in the world’s toughest lockdown trying to eradicate the Omicron variant of the coronavirus under the communist regime’s strict Zero Covid policy.

A chilling video shared by social media users before it was taken down shows scuffles in the streets today as cops forcibly restrained those who resisted.

Dozens of buildings across the city have been converted into makeshift isolation centers as local authorities struggle to contain record infection rates.

However, the number of symptomatic cases in that tally has hit a record 3,200, up from 2,573 reported a day earlier – and experts have warned that the Omicron variant of the virus is too contagious to be controlled by lockdowns.

And many city residents say they are running out of food under rules that allow two volunteers per apartment building to go outside to shop each day for up to two hours.

Hungry locals were also seen storming supply points, on the streets and brawling with law enforcement. 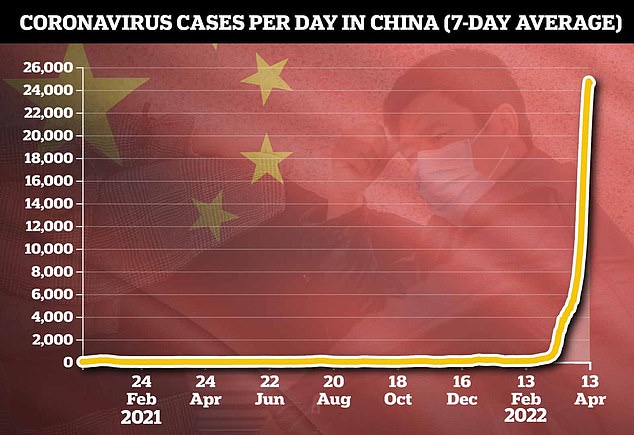 The clips show citizens brawling with health workers and shouting angrily at the lockdowns from their apartment windows.

Another video – also removed – shows young men and women battling with supply distributors on the streets as food shortages continue to plague Shanghai.

The eerie clips emerged as a Shanghai Covid patient filmed the inhumane conditions at their quarantine centre.

More than 200 patients, including young children, share four toilets and no showers at the makeshift isolation center on a vacant office floor. 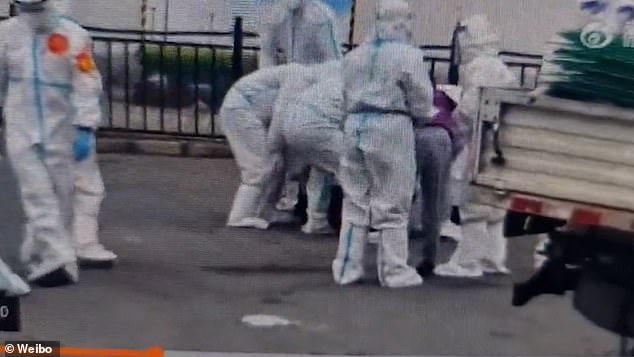 After a team of officials restrained him, he is carried away, now-deleted Weibo upload shows 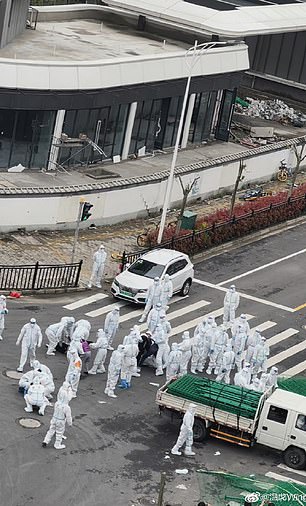 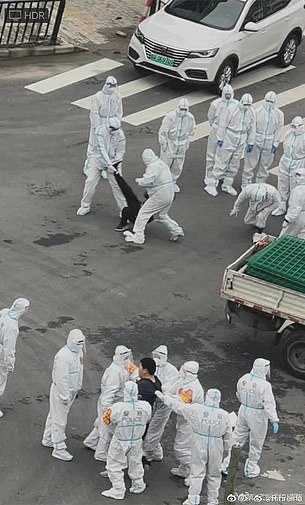 Patients are forced to stay even after testing negative, one patient said – and with ‘less than a metre’ between them, re-infection is more than likely.

The alarming images are the latest sign that all is not well in major Chinese cities.

But President Xi Jinping did not comment on the clips or the now familiar anger of many Shanghainese. He dressed in cool white to visit an economic zone on the Hainan Islands in the South China Sea.

Meanwhile, at the isolation center, only plain bread is offered, said a woman in her 60s who filmed the tight space. 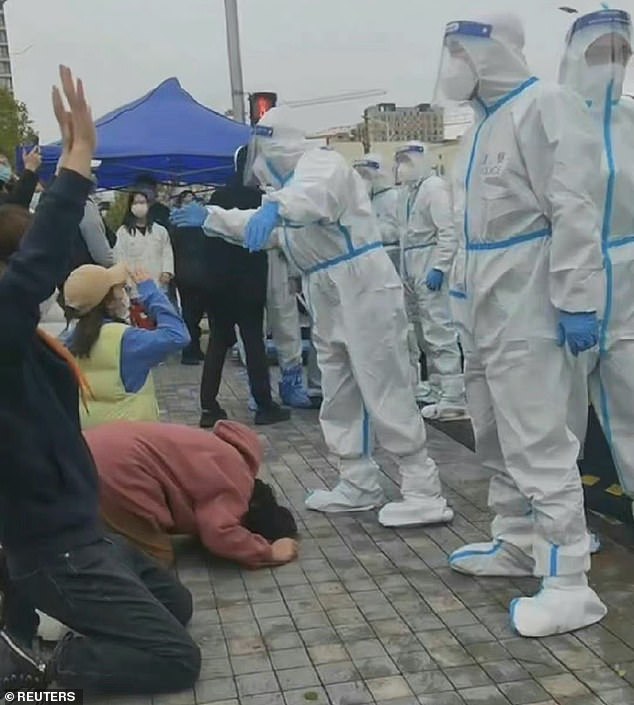 She told Reuters: ‘This center is so packed that everyone is less than a meter apart.

The woman, who would face severe punishment if her identity was revealed, said she was currently Covid-negative.

After almost three weeks in hotel isolation, she was taken to the empty office building – and expects to catch Covid again.

“There are people here who are positive, coughing and have a fever – how can you mix up the positive and the negative?” she added.

Shanghai government officials showed the shocking video claiming they were not even aware of the facility.

They referred Reuters to a transcript of a press conference outlining the center’s guidelines.

Under China’s zero COVID policy, anyone who tests positive must quarantine at designated sites.

President Xi Jinping has insisted that China stick to the policy, known as “dynamic COVID clearance”.

For Shanghai, the policy means converting schools, recently completed apartment buildings and showrooms into quarantine centers, the largest of which can accommodate 50,000 people.

Authorities said last week they had set up more than 60 facilities. 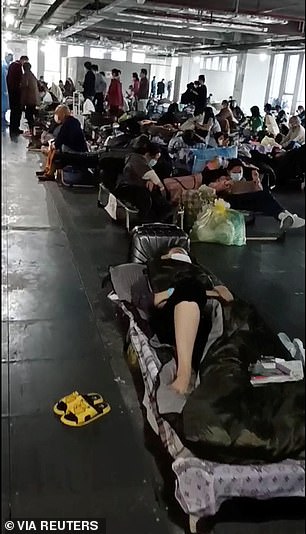 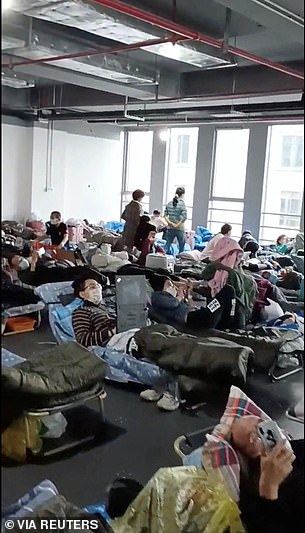 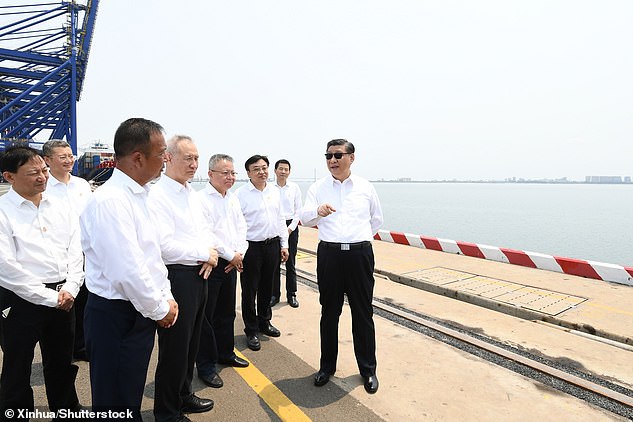 But conditions vary widely and some have drawn howls of criticism from the public.

Authorities did not provide details on the number of people in quarantine, but the city has recorded more than 280,000 COVID infections since March – including record numbers in recent days.

While state media shows hospitals with just two or three patients per room, those sent to Shanghai exhibition centers live side by side with thousands of others, without walls or showers, and with ceiling lights. on 24 hours a day.

Video clips on social media showed an empty factory with cots set up and another site made out of shipping containers. Reuters verified video of the plant but not the containers.

Only two people from each building are allowed out each day to pick up food parcels.

Volunteers must wear full protective white suits and have two hours to complete the job.

Until last month, China had managed to keep daily case numbers in the double or triple digits, with severe localized lockdowns, mass testing and travel restrictions.

But in early April, the number of cases nationwide topped 13,000 for a second day, as the daily tally of infections reached levels not seen since mid-February 2020.

Western diplomats last week expressed concern over the policy of separating children from their parents, while asking for assurances that their ambassadors and diplomats would not be subject to such strict controls.

A coastal town was in turmoil this morning after the latest in a series of mysterious ‘explosions’ shook the community overnight. Security cameras captured the moment a blinding flash was followed by a thundering sound at 3.48am. Watery-eyed residents of Llanfairfechan, Conwy, say their sleep has been disturbed by loud bangs on several occasions in […]

A small group of ultra-Orthodox Jews were attacked Sunday morning as they strolled through Jerusalem’s Old City. Security camera footage showed the three men, wrapped in their prayer shawls (talliot), heading for prayers at the Western Wall. As they were walking down one of the alleys in the Old City, a group of Palestinians jumped […]

Sonic Frontiers will still offer plenty of Sonic’s signature speed, but it will also have tons of space to explore, enemies to fight, and even puzzles to solve. That’s according to a brand new trailer that just dropped courtesy of IGN. In the seven-minute trailer, Sonic is transported to a mysterious island under a shower […]