A small group of ultra-Orthodox Jews were attacked Sunday morning as they strolled through Jerusalem’s Old City.

Security camera footage showed the three men, wrapped in their prayer shawls (talliot), heading for prayers at the Western Wall.

As they were walking down one of the alleys in the Old City, a group of Palestinians jumped out and attacked them violently, threw large objects at them, punched and kicked them, then ran away.

Eyewitnesses told Channel 12 that around 20 people were involved in the attack.

Two suspects in the incident were arrested by Israeli police. None of the Jewish men needed medical attention.

“The Arabs fell on us as we passed by,” said one of the attacked, Eliahu Danziger. “They punched us and hurt us,” he told Channel 12.

Eliahu Danziger (right), who was attacked by Palestinians in Jerusalem’s Old City as he and others walked towards the Western Wall, April 17, 2022 (Channel 12 screenshot)

The incident came amid violent clashes between Palestinians and police throughout the Old City, as security forces sought to allow Jewish pilgrims to visit the Temple Mount.

The Magen David Adom ambulance service said seven people were injured in the incidents and were taken to the city’s Shaare Zedek Medical Center with minor injuries. According to the police, nine suspects have been arrested.

The driver of one of the attacked buses recounted the incident to Channel 12.

“I arrived around 7:20 a.m. at the Rockefeller Archaeological Museum, took a right towards the Western Wall and went down. A group of 20-25 people were waiting for us in an ambush with stones and started throwing them at the bus,” said Shlomi Fadida, who was lightly injured in the attack. 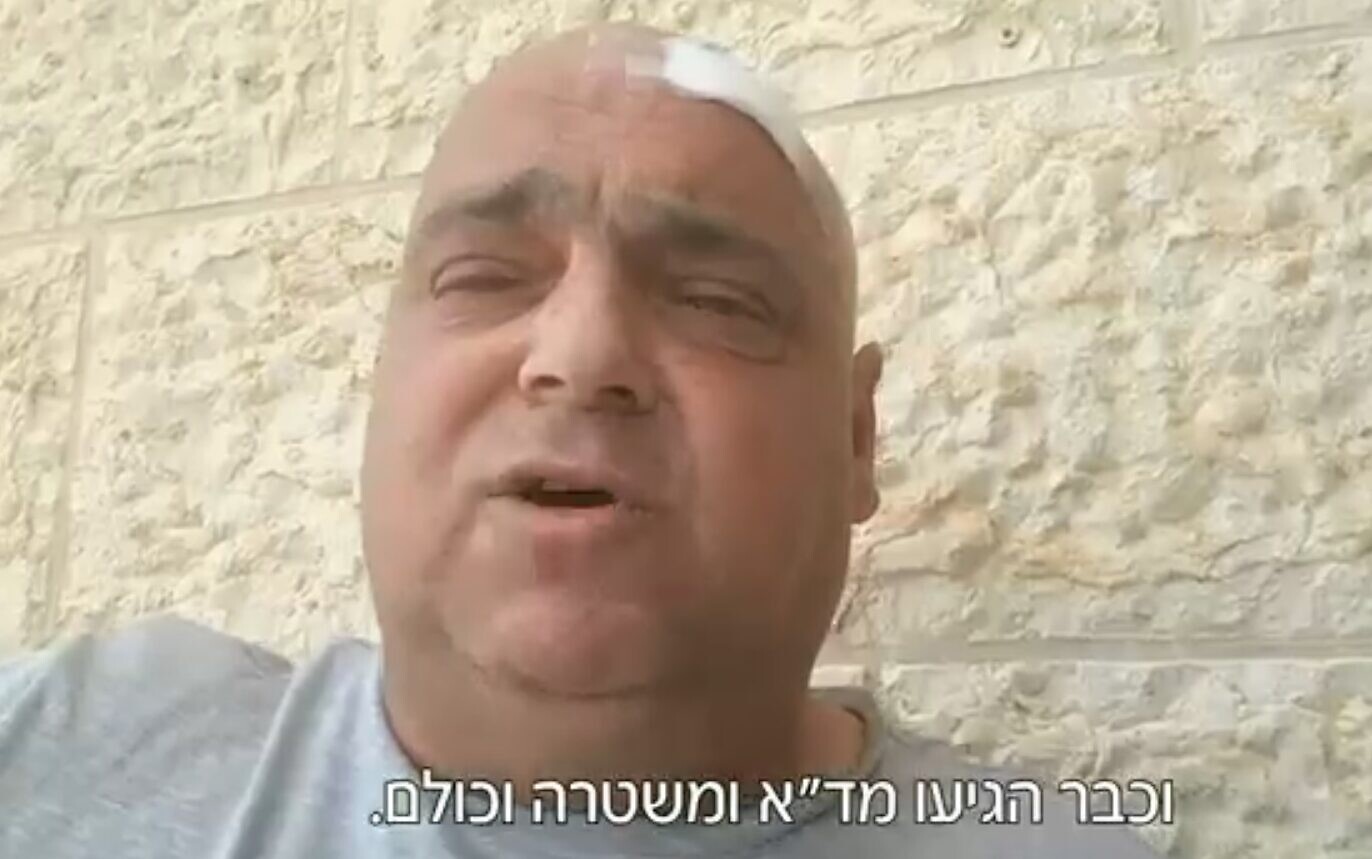 Shlomi Fadida, an Egged driver whose bus was attacked by Palestinian stone throwers outside the Old City on April 17, 2022. (Channel 12 screenshot)

“I didn’t know what to do, I told the passengers to lie down so they wouldn’t get hurt, and we managed to get through it and to the Western Wall, where paramedics and police were waiting. “, did he declare. .

Fadida said despite the danger he had to continue and called on Transport Minister Merav Michaeli to act, saying the bus drivers are “essentially heading for war” and calling the incident a “terrorist attack”.

“If one of these stones had hit a passenger or me, I could have lost control of the bus. We would not have spoken at this time!

Nahum Appleboim, a passenger on the bus with Fadida, said ‘there was a boom, boom, boom’ and a ‘crazy hail of rocks’ hit the bus as it approached the Lions gate . “I received a terrible blow in the shoulder from a stone that flew through the window and I went flying to the ground. There was glass everywhere,” he told Channel 12.

“The pilot was amazing,” added Appleboim, speaking after being treated for his injuries. “He continued…It wasn’t easy…It was terrifying…I was just praying to get out of there.” 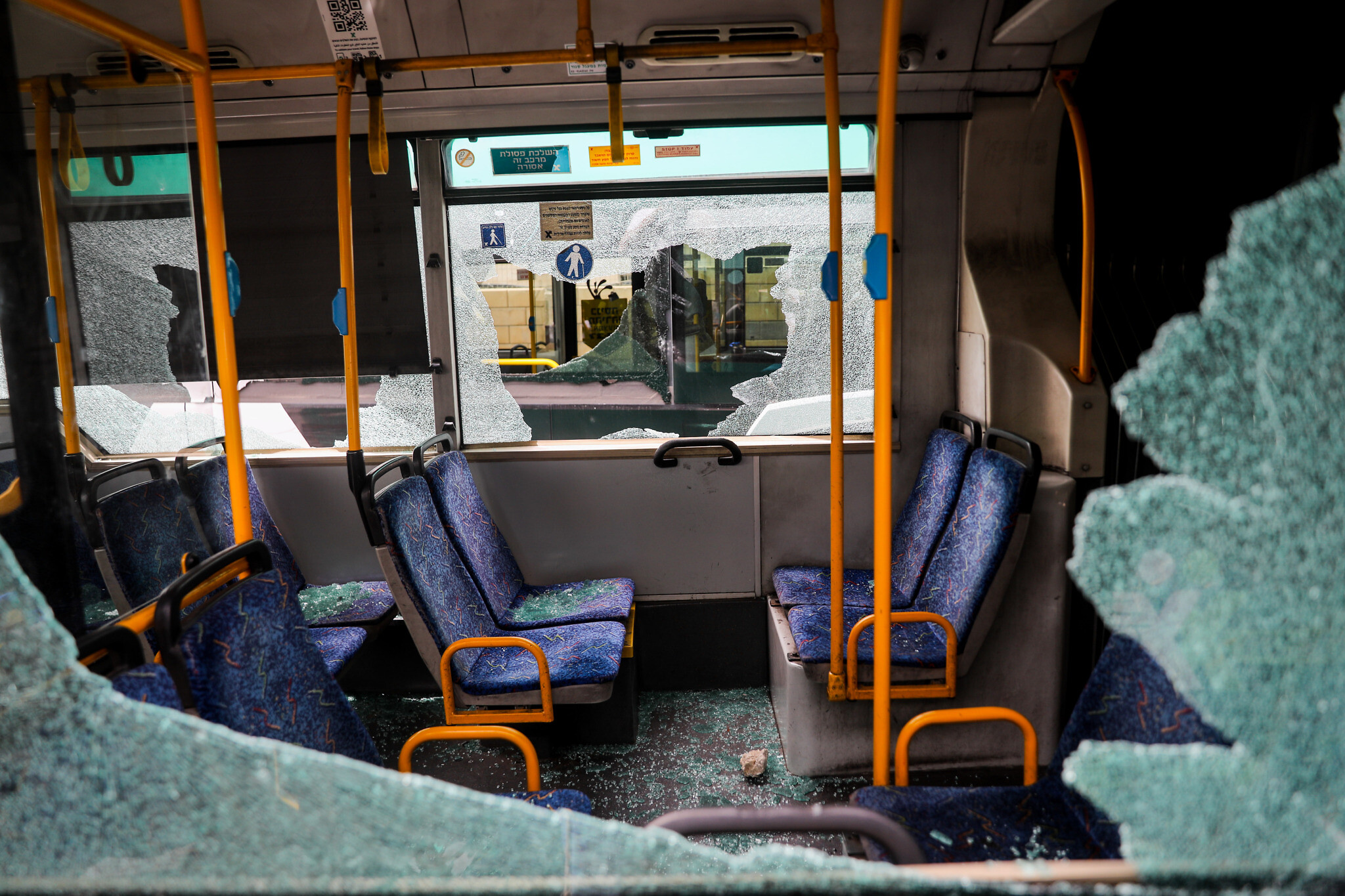 The interior of an Egged bus attacked by Palestinian stone throwers outside Jerusalem’s Old City on April 17, 2022. (Yonatan Sindel/Flash90)

“The police will act firmly against anyone who dares to use terror against Israeli citizens,” he wrote on Twitter. “It is important for us to continue to allow freedom of worship, but we will not compromise in the face of violence and terror.”

Jerusalem’s top cop, meanwhile, deflected criticism of his forces for failing to secure the path to the Old City or stop buses due to the unrest.

“I regret that there are injuries, but we have made the decision not to stop the buses and allow the route to continue to operate as normal,” Jerusalem District Commander Doron Turgeman said, adding that officers were there within 10 minutes.

“The easiest thing for me to do is to stop the buses, but thousands of Jews are heading towards the Western Wall. We arrested the suspects and the buses continued to roll.

Turgeman also said that many officers had been directed to the unrest on and near Temple Mount and that “the cops can’t be everywhere all the time.”

Many Jews head to the Western Wall and the Old City during Passover week, which began Friday evening. Non-Muslims can only visit the Temple Mount at certain times and are prohibited from praying at the site, which is the holiest in Judaism and the third holiest in Islam.

This year’s Passover coincides with the Muslim holy month of Ramadan, which tends to heighten tensions around the Old City. Sunday is also Easter, with Christian pilgrims expected in the Old Town.

The confluence of the holidays this year has been seen for months as a potential trigger for an eruption of violence.

Police said Sunday night that two suspects from the Arab Israeli town of Umm al-Fahm were arrested for throwing stones at a police vehicle. The suspects were males between the ages of 16 and 18.

Police had been dispatched to the city to “maintain public order in the city”, police said.

We tell a critical story

Israel is now a much bigger player on the world stage than its size suggests. As a diplomatic correspondent for The Times of Israel, I am well aware that Israel’s security, strategy and national interests are always under scrutiny and have serious implications.

It takes poise, determination, and knowledge to accurately convey the story of Israel, and I come to work every day aiming to do just that.

Financial support from readers like you allows me to travel to witness both the war (I have just returned from a report in Ukraine) and the signing of historic agreements. And it keeps The Times of Israel the place readers around the world turn to for accurate information about Israel’s relationship with the world.

If it’s important to you that independent, factual coverage of Israel’s role in the world exists and thrives, I urge you to support our work. Will you join the Times of Israel community today?

You are a dedicated reader

We’re really glad you read X Articles from The Times of Israel over the past month.

That’s why we started The Times of Israel ten years ago – to provide discerning readers like you with must-read coverage of Israel and the Jewish world.

So now we have a request. Unlike other media, we don’t have a paywall in place. But since the journalism we do is expensive, we invite readers to whom The Times of Israel has become important to support our work by joining The Times of Israel community.

For just $6 a month, you can help support our quality journalism while benefiting from The Times of Israel WITHOUT ADVERTISINGas well as access Exclusive Content only available to members of the Times of Israel community.

Thanks,
David Horovitz, founding editor of The Times of Israel

In this image taken from police body camera footage, officers surround a van and retrieve a gun from inside before providing medical aid to Anthony Parker, who is seen pointing a gun at a police officer during a a long stalemate on February 7 in Marana. Parker was killed in the shootout. Marana Police Department […]

Tesla recently started offering free EV boosting in several countries around Ukraine for people fleeing the country following the Russian invasion. In an email to local owners, Tesla announced the creation of several boost stations near Ukraine’s borders with those countries free of use for Tesla and non-Tesla electric vehicles, sources said. A viral video […]